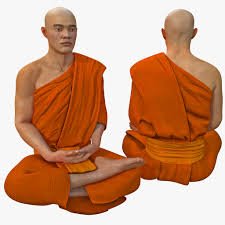 Steve Jobs lost his entire Apple fortune by 1994, betting it on NeXT and Pixar. In 1995 everything turned around, he sold NeXT to Apple, Pixar to Disney and he passed away an icon. Walt Disney mortgaged away his entire fortune in the 1950s to build Disneyland, against everyone’s advice. He too went from giving up everything to becoming a legend. Each bet everything material they had on something invisible – their purpose and vision.

Monks call the state that comes after giving up everything “Moksha” which means liberation from the illusion. We’re not alive until we know what we’d die for.

I’m not saying great entrepreneurs are monks, but they do have ‘monk moments’ when they lose everything.

Many of the greatest entrepreneurs unintentionally find themselves in this state by betting everything on their dream. Maybe you’re in this place right now. It is a place of pure power. When you have nothing to lose, you have infinite potential.

That is provided you don’t focus on what you’ve lost, but on everything you have to gain. That’s when everything turns around. As Walt Disney said “I don’t make movies to make money. I make money to make movies”.
That’s the paradox of entrepreneurs having a ‘near-death’ experience where they lose it all. Steve Jobs wrote:

“Remembering that I’ll be dead soon is the most important tool I’ve ever encountered to help me make the big choices in life.

Almost everything–all external expectations, all pride, all fear of embarrassment or failure–these things just fall away in the face of death, leaving only what is truly important. Remembering that you are going to die is the best way I know to avoid the trap of thinking you have something to lose. You are already naked. There is no reason not to follow your heart.

No one wants to die. Even people who want to go to heaven don’t want to die to get there. And yet, death is the destination we all share. No one has ever escaped it, and that is how it should be, because death is very likely the single best invention of life. It’s life’s change agent. It clears out the old to make way for the new.”

What mission is so important to you, that you’d be ready to clear out the old and make way for your new?